mtvnews: Ariana Grande’s concert at England’s Manchester Arena tonight (May 22) ended in a mass emergency evacuation after reports of explosions... It’s unconfirmed what the source of the explosions was, but fan-shot footage shows the frightening scene inside the venue, which holds up to 21,000 people. Officials are currently investigating... 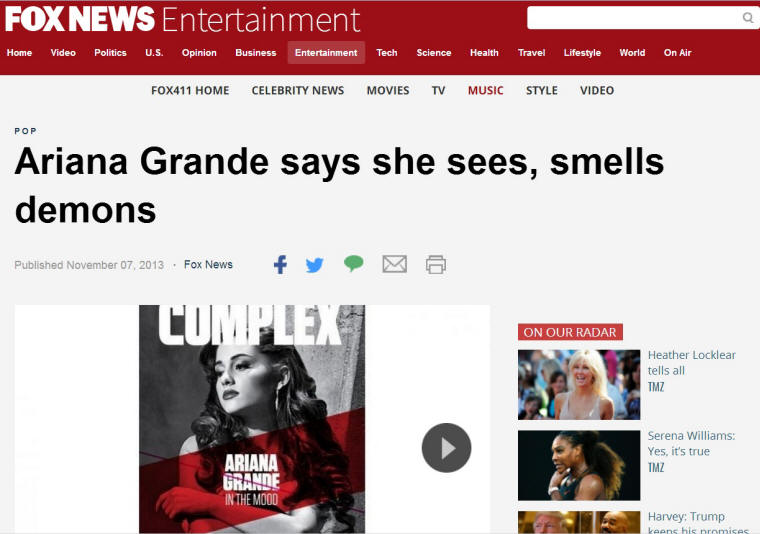 The "Sam & Cat" actress, who also sings the hit song "The Way," is on the cover of Complex Magazine, for which she gave an interview in which she talked about evil presences in her car, photographing "textbook demons" with her smart phone, and something whispering near her head as she tried to sleep.
Here is a quick excerpt - go to Complex for the full interview (which has some more normal answers to questions in it as well).
Complex: Have you ever seen an alien?
Ariana: Not an alien, but I’ve had a ghost/demon experience. We were in Kansas City a few weeks ago and went to this haunted castle and were so excited. The next night we wanted to go to Stull Cemetery, which is known as one of the seven gates to hell on Earth. The Pope won’t fly over it.
Complex: I love that you know that. Sorry, go on. Ariana: I felt this sick, overwhelming feeling of negativity over the whole car and we smelled sulfur, which is the sign of a demon, and there was a fly in the car randomly, which is another sign of a demon. I was like, “This is scary, let’s leave.” I rolled down the window before we left and said, “We apologize. We didn’t mean to disrupt your peace.” Then I took a picture and there are three super distinct faces in the picture—they’re faces of textbook demons. Complex: Let’s see the picture.
Ariana: I deleted it. The next day I tried to send the picture to my manager and it said, “This file can’t be sent, it’s 666 megabytes.” I’m not kidding. I used to have a folder called “Demons” that had pictures with all the screencaps in it, but then weird things started happening to me so I deleted it.
Complex: What weird things?
Ariana: I was going to sleep about two weeks ago. I had just gotten off the phone and as soon as I closed my eyes I heard this really loud rumble right by my head. When I opened my eyes it stopped immediately, but when I closed my eyes it started again with whispers. Every time I closed my eyes I started seeing these really disturbing images with, like, red shapes. Then I opened my eyes and got back on the phone and was like, “I’m really scared and I don’t want to go to bed tonight.” And then I scooched over to the left side of my bed, because that’s where the best service is in my room, and there was this massive black matter. I don’t know what it was.
Complex: What?!?
Ariana: It was like a cloud of something black right next to me. I started crying. I was on the phone like, “What do I do, what do I do?” and they said, “Tell it to eff off.” I thought, I’m not going to do that. It’s going to upset it, so I’m just going to chill and not feed into it because all it wants is fear. It feeds on fear. I watched it move to the front of my bed and then I fell asleep on the phone. I woke up and it was gone. The next night my friend Tyler was staying with me. She said she was trying to sleep and her body felt paralyzed almost, and she described the same exact thing I saw. 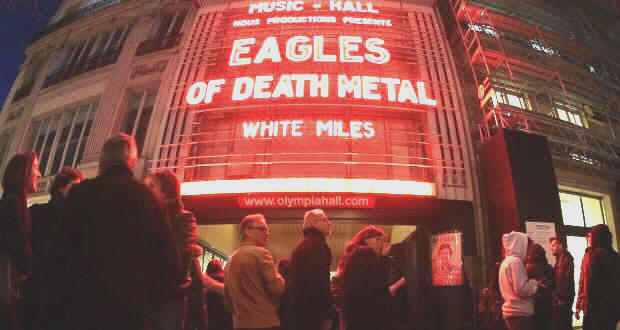 Manchester bombing echoes Isis attack on Bataclan and of ‘youth being targeted’ .